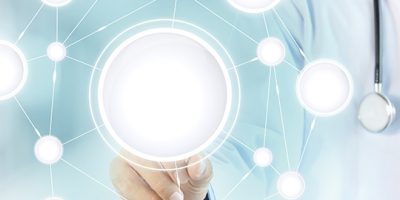 In 2000, before the dot-com bubble peaked, a buddy and I decided to start a company in the packet voice space which had been heating up. We were out hunting for funding from venture capitalists.

I’d been leading the team that developed the Polycom Soundstation line, and a colleague and I wanted to build carrier grade packet voice processing equipment for telecommunications companies. We had some ideas on innovations for voice over IP. A mentor of mine who was a venture capitalist said to me, “You know, I just met a couple of engineers who have a very good idea in the wireless communication space, who could use your background in digital communication systems. Why don’t I introduce you and see if you can work together?”

That’s how I met Dr. Rob Shostak and Randy Nielsen, the co-founders of Vocera.

They described their idea, which was very innovative. They wanted to bring the Star Trek communicator to life! No wearable voice-activated device had ever been introduced, and the technology didn’t even exist to accomplish this. But we knew that with some ingenuity, grit and luck, we could achieve their vision and it would be fun!

Shortly after that introduction, the dot-com boom collapsed and I became reluctant to take risks. But I had faith in Rob and Randy because they had prior experience with several startups, so I decided to take the plunge with them. Pretty soon, I realized that this was a great opportunity to merge the best of my voice over IP ideas with the best of what they had into one product line. The promise of disrupting communication technology was exciting to me!

What happens when a premed student becomes an engineer

The path to communication technology for healthcare was a logical one for me.

After high school, I was a premed student. I’d always wanted to become a doctor. Back in India, they used to have entrance exams for a couple of very competitive medical schools and I was accepted at one. Around the same time I was also admitted to an engineering program.

Vocera offered the perfect marriage of my engineering background and passion for medicine.

Communication technology in healthcare should be simple and intuitive

Earlier in my career when I helped develop the Polycom Soundstation, our aim was to take the device out of the conversation. We wanted to make it so natural that people would feel like they’re sitting in the same room.

For me, that passion has continued on in my work at Vocera, where we make the technology as invisible and natural as possible, and enable instant communication when seconds can mean quite literally life or death.

Vocera turned the communication paradigm on its head.

Phoning someone used to require knowing a phone number. This paradigm can impose barriers, because when I’m thinking of communicating with someone, I’m thinking about a person and not the device they’re carrying or its phone number.

With the Vocera solution, a user can call another user or group of users simply by saying their name. A call recipient could be carrying a cell phone or wearing a Vocera® Communication Badge. They could be at home, or on their office line.

When I call Susan Smith using the Vocera solution, the system knows that today Susan is working from home and she’s on her home office number, and automatically calls that number.

As the person calling her, I don’t need to know where she is. I’m walking around, I’m doing my job, and I don’t have to search for a phone number or figure out what pager number to call. I say her name, and the system directs the call to where she is – intelligently.

Or maybe I’m looking for the on-call pediatric toxicologist, and I don’t know who that is today. I can reach that person just by telling the Vocera Badge to “Call pediatric tox” or whatever term this hospital uses.

So ingrained in workflow you can’t imagine life without it

As senior vice president responsible for products, the direction I want to take Vocera technology is to make communication more contextual and intelligent, and make technology even more invisible.

In my vision, the Vocera solution anticipates whom a user will need to talk to in the upcoming moment, and about what. So when a nurse tells the Vocera Badge to “Call Alex,” the system knows instantly that because this nurse just came out of an ICU, she was with a certain patient. And that patient was recently under the care of a physician named Dr. Alex Kemper.

When the nurse says “Call Alex,” the system should automatically anticipate which Alex. There might be six people named Alex in the hospital but the system should be intelligent enough contextually to know what the user wants to do. And because this future Vocera solution understands what you’re trying to do, it sends contextual information to the person you’re trying to communicate about who’s calling them and why. I envision Vocera technology becoming so ingrained in a hospital’s workflow that a caregiver cannot imagine living without it.

We need to make the system much more intelligent and integrate it more with other parts of hospital healthcare systems that have pieces of the necessary knowledge.

To get there, companies that provide technology to healthcare systems will work together, collaborating along some common vision for what the hospital of the future or the care team collaboration of the future could look like. I want Vocera to play a big part in that.

The biggest driver of Vocera’s evolution has been the creative people in the caregiving community, inside hospitals, who have seen how the Vocera solution works and then thought of new, creative ways of using it to solve other types of problems.

At El Camino Hospital in California, a charge nurse encountered a set of problems. The hospital needed to speed up the STEMI door-to-balloon time for cardiac patients. It also needed to reduce the time between when a person reports the first symptoms of stroke and when they receive the right care.

This nurse studied the problem and recommended using Vocera technology in a way that no one anywhere had before.

The innovation was to create a simple alert when the emergency medical service (EMS) called into the hospital about a patient with chest pain or stroke risk. The alert would broadcast to a small team, who would then prioritize getting the chest-pain patient into the cath lab or the stroke patient to the CT scanner.

The hospital was able to reduce the door-to-balloon time by more than 40 percent, from upwards of 100 minutes, to about 50 minutes. They also improved their emergency department diversion rate over the course of three consecutive months by making this simple tweak to the group calling capability of their Vocera solution. It was a huge deal and I’m sure it saved many lives.

Another innovation came in August of 2007, when a Minnesota freeway collapsed and 50 or so cars plunged into a river running under I-35.

People were panicking. Cell phones were jammed. All the networks were busy. People weren’t able to get through to 911. Because cell phones weren’t working, not even EMS teams could connect with people inside the hospitals.

One nearby hospital had a Vocera solution.

Vocera technology is purely wireless; it doesn’t use cell technology at all, and it can be accessed from any land line. An administrator at the hospital used the hospital’s Vocera system to set up an incident command center that was able to successfully direct injured and trauma patients into the hospital’s emergency department and coordinate all the department’s activities. For example, EMS teams could call into the Vocera system and broadcast to a team or send a message to alert people about incoming patients.

Because of this innovation, the hospital was able to clear out 28 emergency department beds, 10 operating rooms, and 22 ICU beds. Care teams stabilized 24 patients and performed 8 emergency surgeries. It was all possible because they thought of this creative way of directing traffic away from the cell network into the Vocera system using the Wi-Fi technology inside the hospital.

The hospital received an award from the National Association of Public Hospitals, and it all began with a hospital administrator saying, “Let’s try it this way.”

What makes me most proud is that we didn’t come up with the idea, a user did. They saved lives that day.

Our technology can do what it does because of all the times customers came to us and said, “We envision using the Vocera solution in such-and-such way; if you could just add these two things, then we’d be able to deliver this use case.” We typically jump on these opportunities and say, “Sure enough.”

To me, the beauty of our technology is that it’s not something we prescribe; it’s something people adapt to their needs. We wouldn’t have come up with these types of use cases, but our users have.

I compare the Vocera solution to a symphony.

When you listen to a symphony, what grabs you is that the conductor somehow unites all these talented musicians to create something that they individually wouldn’t have been able to do.

Our solution does for care teams what a conductor does for an orchestra. The conductor coordinates the musicians and lets them do what they do best in a way that ultimately results in good outcomes. We create the symphony inside our healthcare systems by making it easier for caregivers to do their jobs. 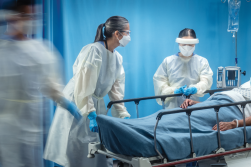 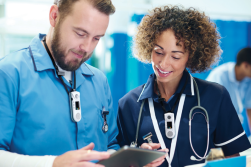 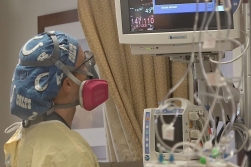