We’ve all seen them – posters on the wall that proclaim an organization’s commitment to a set of values. Too often these sit alongside other posters that subtly but clearly run counter to those values. Or they’re the overlooked backdrop to conversations that reflect decisions and behaviors that show no connection to what the organization purports to espouse.

Not at NewYork-Presbyterian (NYP). At least, not anymore.

When Rick Evans rejoined NYP as Chief Experience Officer after a stint at Massachusetts General Hospital, he noticed increasing levels of stress among and between staff. Other members of the executive team also observed this dynamic. The issue of respect, which is one of NYP’s values, was frequently cited in discussions. 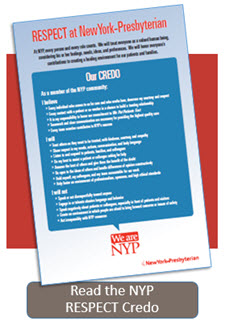 NYP’s CEO, Dr. Steven Corwin, asked the team to find ways to address this issue head on. After delving into data, talking to staff, and reviewing exit interview notes and other resources, NYP leaders and frontline staff members created a Respect Credo. “The issue of respect emerged very powerfully,” said Mr. Evans. “If you look at what team members want: they want a workload that they can cope with; they want to feel valued; they want to feel like they’re important.” It all came down to respect.

After crowdsourcing the Credo, NYP leadership distributed it to units and departments, spread it through the organizational newspaper, the NY Press, and integrated it into training, onboarding, and recognition and rewards systems. They trained leaders on the Credo and asked them to work with their teams to identify a specific area to work on.

From there, it exploded.

“We didn’t tell teams what to do with it other than to have a dialogue about elements of the Credo that spoke to them,” stressed Mr. Evans. “Our Lower Manhattan Hospital has a ‘Credo Crown.’ The person who brings the Credo to life gets to wear the crown – they pass it around the organization. Another place made fortune cookies with a line from the Credo in each one. They break open a cookie in their morning huddle and read the line and talk about it. People got really creative. They brought their own energy and spirit to what the Credo meant to them.” It even spread on Twitter.

But spreading the Credo and awareness about it was just the beginning. Mr. Evans explained, “Staff members are thinking, ‘I’ve got some stuff that I’ve been struggling with for a while. I feel disrespected if you don’t take those issues on. If you really want to do respect? Make a credo – lovely. But I want you to deal with some of my stuff that I’m struggling with.’”

NYP applied the principles of respect to their process improvement work and to their efforts to attain Magnet Recognition Program® certification. “When people look at the Credo, they see different things, but they zero in on what their group needs to work on.” As an example, nursing teams worked together with food service and housekeeping to understand one another’s needs and processes. Based on this shared understanding and respect for one another’s work, the teams created service-level agreements and agreed to report out on how often these SLAs are met. Both teams are now more connected to their shared goals.

NYP applied respect to the concept of staff safety. “The risk in healthcare is incredibly great,” explained Craig Albanese, M.D., MBA, Senior Vice President and Chief Operating Officer, Morgan Stanley Children’s Hospital and Sloane Hospital for Women. “And the culture is that we often put our own health and safety second to patients’. The ultimate show of respect is we want to send our team members home in the same condition they came to us: zero workplace harm – and not just physical harm, but emotional harm and verbal abuse.”

Whenever a staff member gets hurt, Dr. Albanese and other organizational leaders call them to check in on how they’re doing, let them know he and the other leaders care about their well-being, and see if there is anything they need. “I also ask them to think about what happened,” reported Dr. Albanese, “and can they think of a way to prevent it in the future.” Team members know they can escalate safety ideas to Dr. Albanese or their direct supervisor.

Recognizing that respect is important, not just between staff members but also between patients and care team members, NYP is working on a policy that deals with abusive behavior toward staff by patients and families. Mr. Evans described the goal of the policy. “The policy will let staff know, when this happens, it will not be tolerated and you are not alone. You will be backed up, you will be supported, there’s a proper escalation channel. You’re never facing this kind of behavior on your own. We will have to take care of patients – even the racist ones, the homophobic ones, the sexist ones – but how we mobilize as a team will let the frontline person know we have your back.”

“We have even pivoted on how we measure performance,” explained Dr. Albanese, “In the past we’ve given too much weight to subject matter expertise at the expense of professionalism. Now we’re saying it’s 50-50. Whether you’re a physician, a nurse, or a transporter, we value what you do 50%. The other 50% is professionalism.”

NYP’s efforts have yielded more than energy and dialog. “All the measures we were struggling with are moving again,” reported Mr. Evans. “We’ve had eight quarters in a row of improvement in patient experience after three years of stagnant scores, the highest number of quality indicators and goals hit ever, our best year for length of stay in memory, rising employee engagement scores, improving culture of safety survey scores, and we’re improving in our ability to resolve issues. And we had our best year financially in history. We think this is because our employees feel we’re in this together.”

As a healthcare leader, your organization’s key concept or values may look different from NYP’s.  At Santa Clara Valley Medical Center, they focus on kindness. Presbyterian Health System in New Mexico has the Presbyterian Promise. At Lakeland Health, they rally around love – so much so that their Chief Experience Officer is also the AVP of Love and Respect. In each of these cases, the values resonate deeply with frontline team members. And bringing these values to life takes a strong commitment from leaders to walk the walk – in every organizational decision, across every initiative, and in every conversation. It becomes who you are.

“Trust happens when people feel they are listened to and responded to. That’s the foundation of respect,” said Mr. Evans. “This applies to everyone in the organization. If you’re part of the NewYork-Presbyterian family, this is us.” 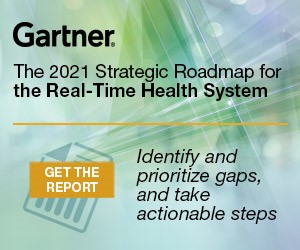 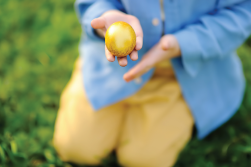 A Better Experience for Patients and Staff with Vocera Easte... 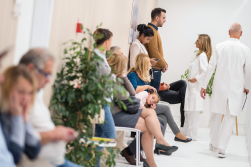 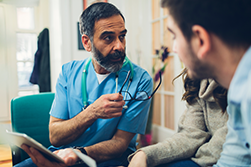